A client of mine recently asked me to add the "Ken Burns" pan-and-zoom effect to the slideshow that was already built on their Drupal site using Flexslider.  I didn't want to rebuild it using a different slideshow library that supported the effect out of the box and I wanted something that would produce a nice set of pans and zooms and durations that would be random and different each time the slides were presented without going beyond the slide bounds or leaving gaps or whitespace.  I came up with this javascript client-side Drupal behavior that could be added directy to the theme to add the new effect without changing anything else about the build.

It should be pretty much drop-and-go for you if you use Flexslider on your Drupal site and know how to had Drupal javascript behaviors to your theme.  It assumes the container for your slideshow uses the class "slides" as it uses jquery to target the individual slide list items with ".slides li".  To customize it, you can change... 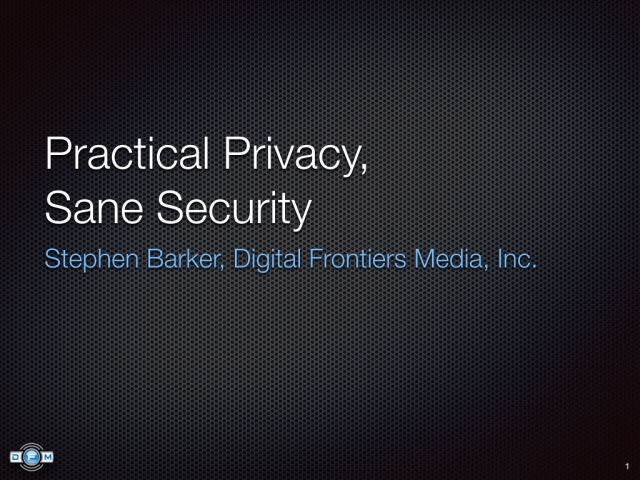 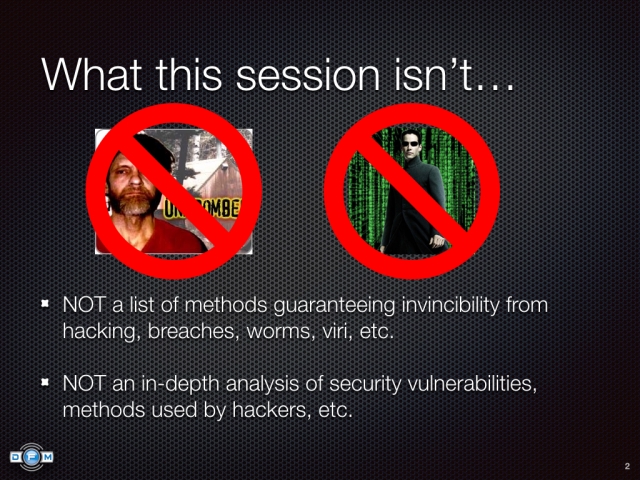 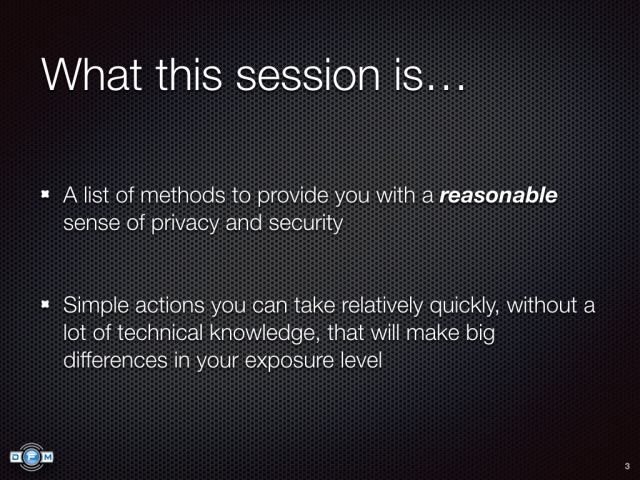 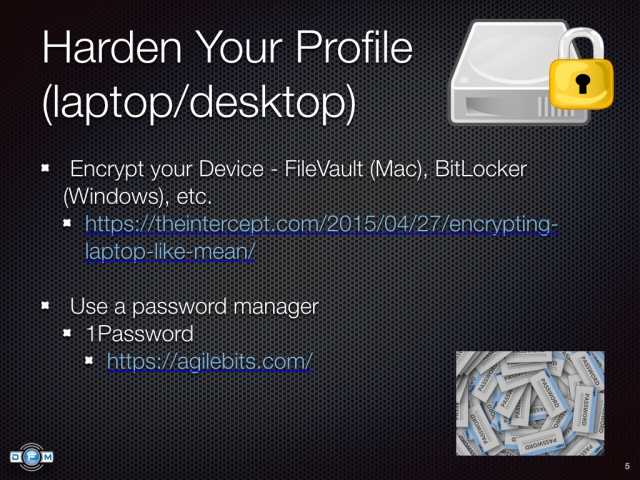 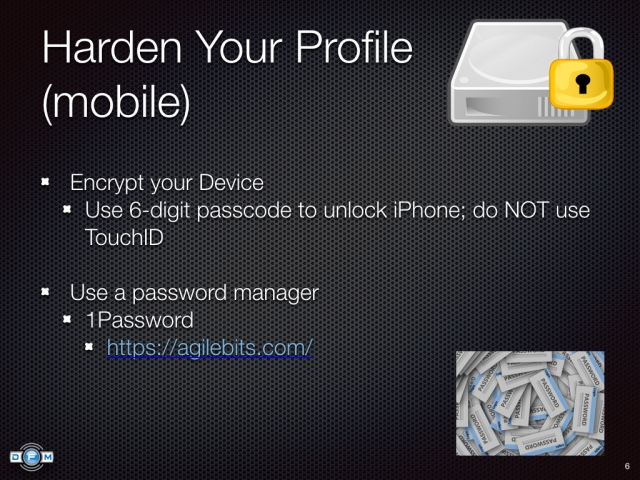 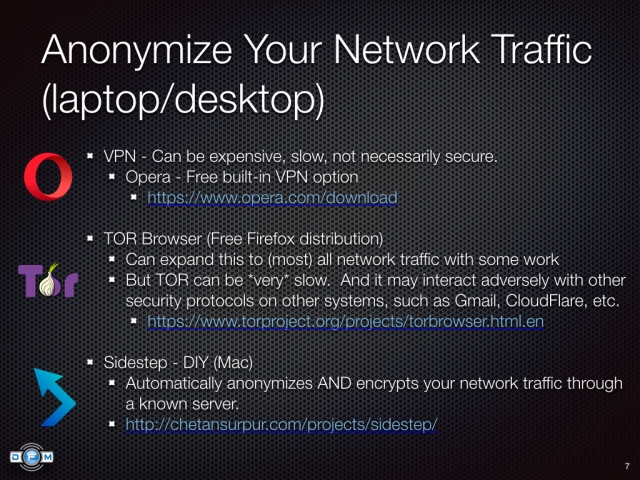 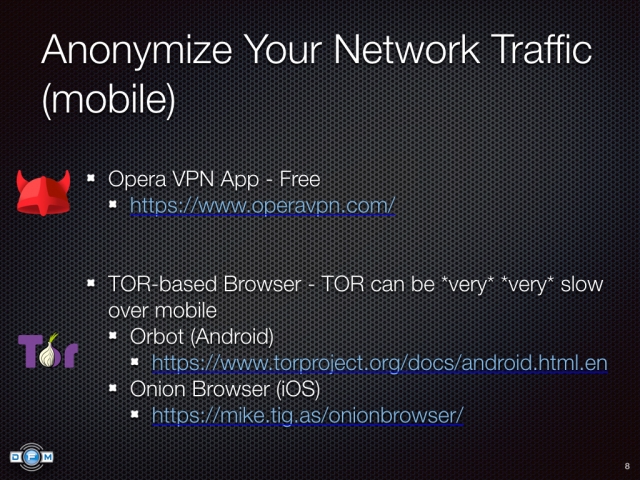 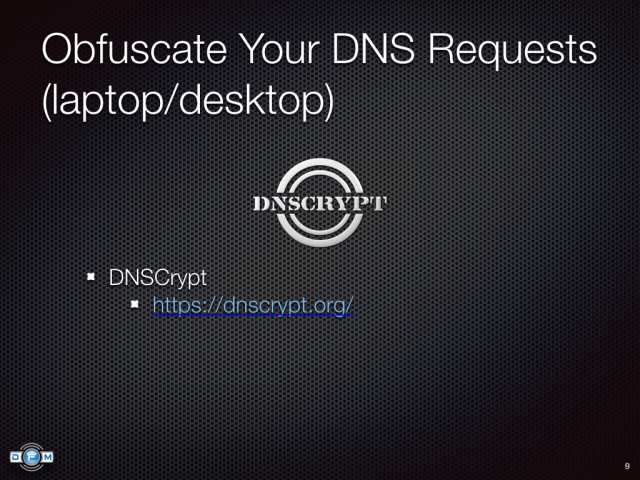 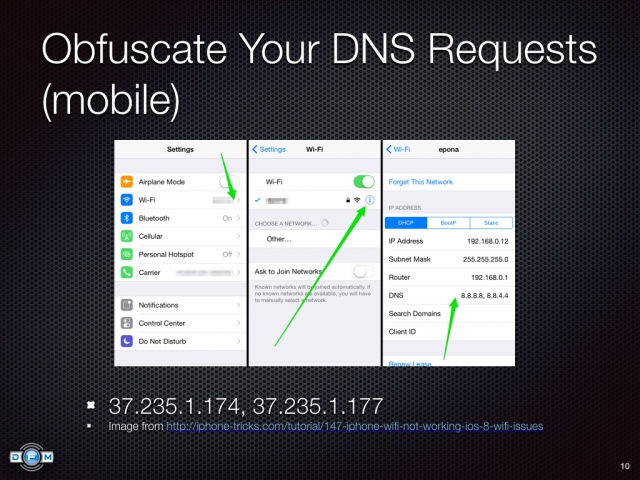 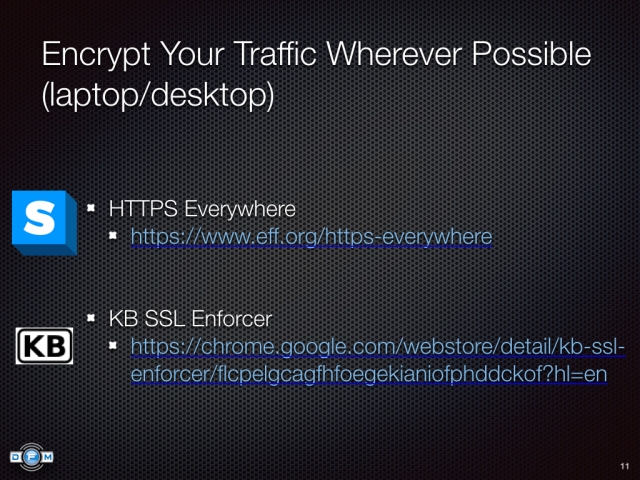 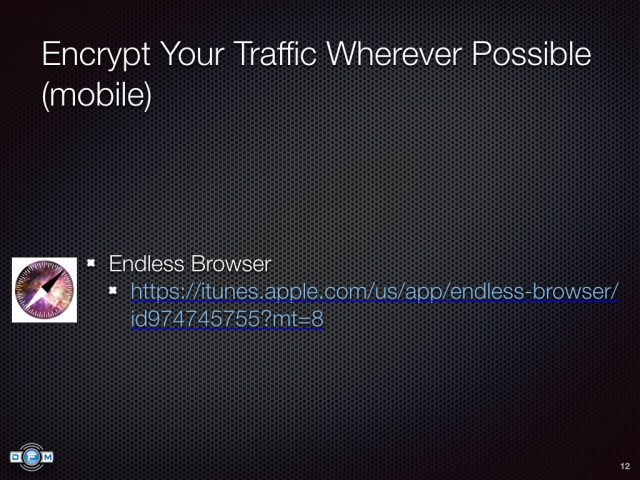 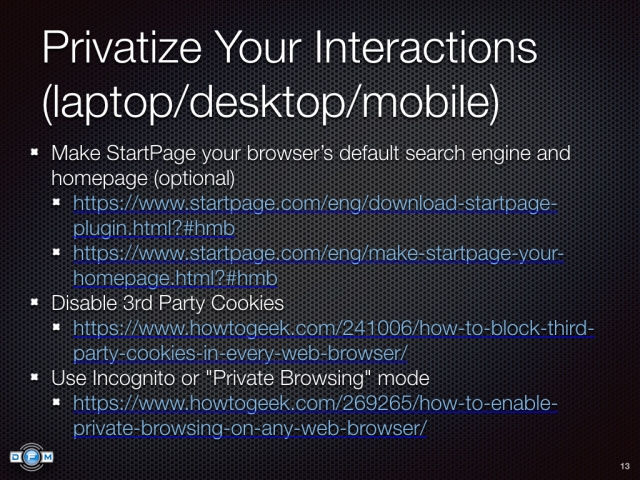 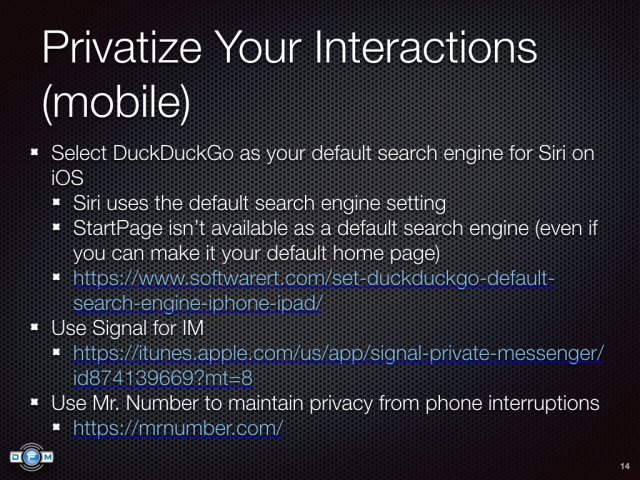 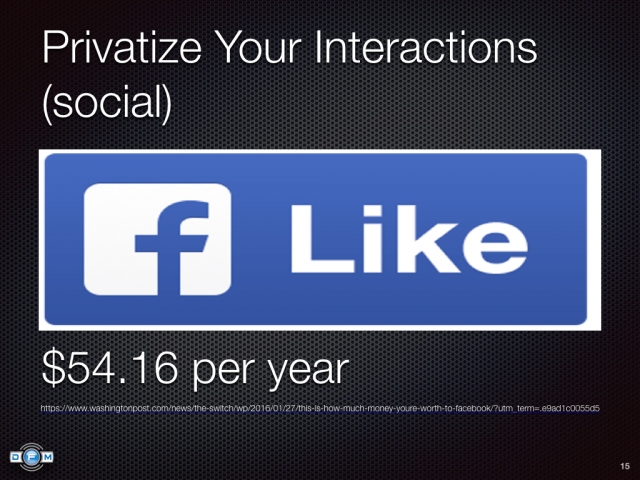 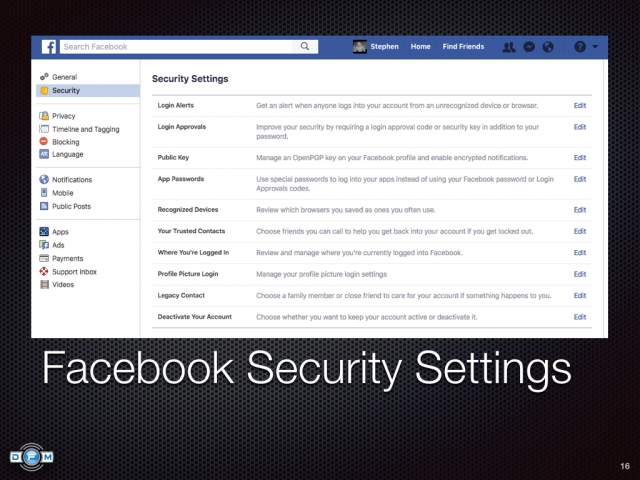 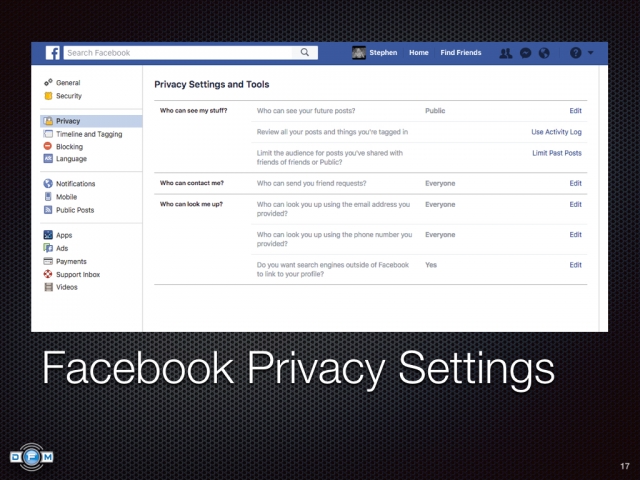 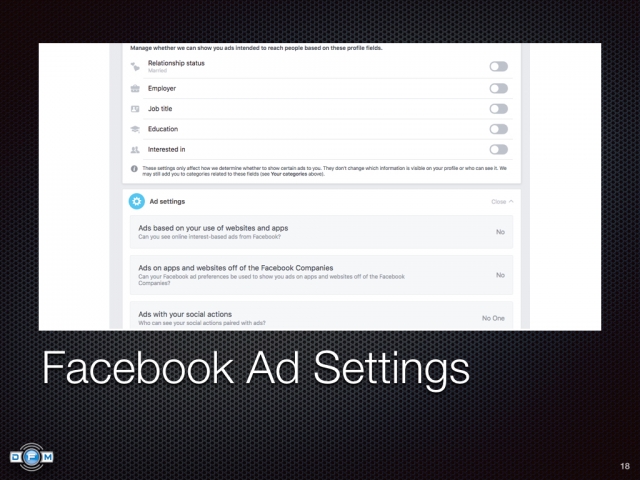 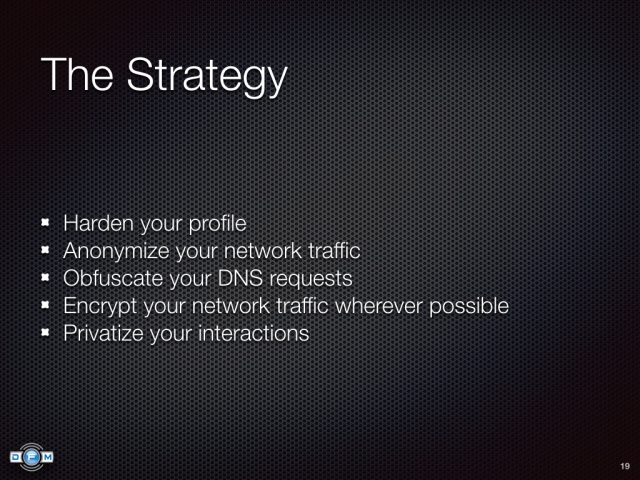 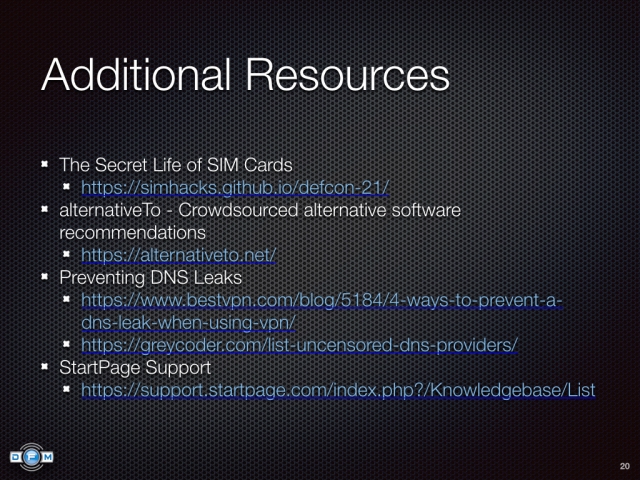 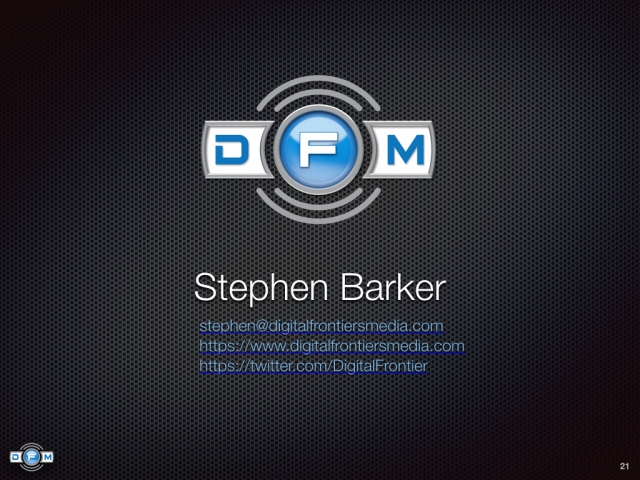 A friend once told me that if everyone is sending envelopes, then sending a package looks suspicious.  Earlier today, I spoke at the 2017 DaVinci’s Faire & BarCamp with the goal of getting more people sending metaphorical packages since if everyone sent packages, packages would no longer garner suspicion.  Today, it is not completely unheard of for an ISP to send cease and desist notifications to people using TOR--a system that provides privacy and anonymity for online interactions.  And many systems out there, including CloudFlare and Atomic Secured Linux, are now purposefully blocking access to people using it.  While TOR is often used to mask malicious activities online, TOR is also used by universities and laboratories...simply being a private person and wanting to keep one's online activities private SHOULD NOT BE CONSIDERED A SUSPICIOUS ACTIVITY!

If web and internet services have a problem with malicious activities, then they need to improve those systems that...

Read more
CloudBleed: On Which Sites Do I Need to Change My Passwords?
Posted on Saturday, February 25, 2017
Blog Categories:
Technology Lab 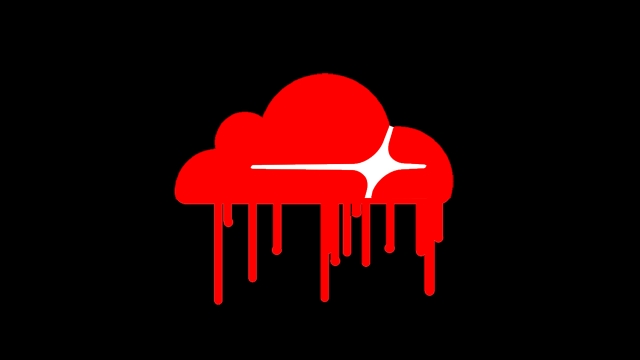 Most of those in the development community learned yesterday that their attempts to secure their websites actually left them vulnerable to attack.  Beloved CloudFlare typically heralded as a method to shield websites from attack revealed it had a serious bug that leaked memory from "protected" sites that could reveal client IP addresses (one of the big security selling points of CloudFlare), private information, authentication tokens, cookies, passwords, private keys...basically everything that would keep a web developer up at night.  CloudFlare stated in a blog post yesterday:

The greatest period of impact was from February 13 and February 18 with around 1 in every 3,300,000 HTTP requests through Cloudflare potentially resulting in memory leakage (that’s about 0.00003% of requests).

However, it could have been leaking information as long ago as September 22, 2016.

What should I do?

The general recommendation has been to change your passwords,...

As a digital agency, our team members have been privy to the “back end" of dozens of other developers' websites. Content management systems (CMS)’s such as Drupal, Wordpress, and Joomla can be built in thousands of ways. One thing we get to see from behind these curtains is the huge difference between a good, architected, user-friendly administrative end, and a back end that ends up creating more work for busy marketing teams. It is very easy for developers to offer a budget-build "content management system" that doesn’t actually manage content at all. It's an important distinction; a site that lets users update their own website without code is not necessarily a "content management system."

An example of such a site is one that we manage for a client. After paying another agency for a content management system, our clients were still having a hard time updating their website and turned to boostDFM for help with their website and the digital side of marketing. After checking... 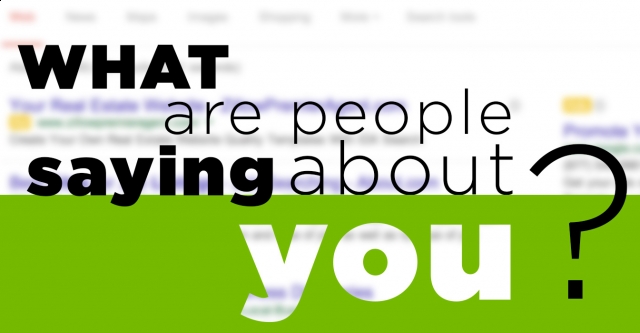 BoostDFM now offers expertise in digital presence management and online public relations services. Even if you carefully monitor and maintain your website and business social media pages, your online presence is constantly being updated by other people - thanks to services such as listings sites, reviews apps and more. Fortunately, there are measures you can take to maintain these outlets, and BoostDFM is excited to offer a variety of management services.

Every business is different and has unique needs. We tailor each presence management package to fit our clients, but a sample of services may include:

Page Ranking is one of the most popular discussions when considering a new website. In fact, if I hear another CEO try to explain the importance of SEO to me one more time, I may shoot myself in the arm because it would be less painful. (Insert political joke here). Most companies look to the developers for making their website “#1 on Google” through the use of meta-tags, unique URLs, and other old development tactics that helped before CMS’s did it all for you. Successful SEO isn’t from your development.

Although it’s still important, it’s all about your social media and how it’s intertwined through your website. Here’s some important information in regards to social media and its affects on search. There are roughly 1.5 Billion social accounts by Facebook, Twitter, LinkedIN and Google+ users. 3.3 billion pieces of content are shared on Facebook each month and there are over 5 billion Google +1’s a day. A majority of content created on the Internet each day is from social...